Hello and welcome to Belgium! Below you can find some general information about our country. You will see that, although we are a very small country, we have a lot to offer!

Have a beer and enjoy our SCOPE and SCORE wiki page!

Belgium is a small country located in Western Europe in between the Netherlands, France, Luxembourg, Germany and the North Sea. It counts a bit more than 11 million inhabitants. The biggest city is Brussels, located in the center of the country. This is the capital of Belgium as well as the capital of the European Union. 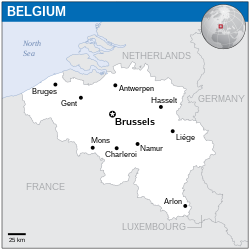 The Belgian health care is considered as one of the best health care systems of Europe, which also contributes to the excellent general health of the population.

Healthcare in Belgium is financed through both social security contributions and taxation. Health care is delivered by a mixed public and private system of independent medical practitioners and public, university- and semi-private hospitals. Health care services are paid by the patient and reimbursed later by health insurance institutions, but for eligible categories (of patients and services) so-called 3rd party payment systems exist. Belgian health care system is supervised and financed by the federal government, the Flemish and Walloon Regional governments and the German Community also have an (indirect) oversight and responsibilities. Belgian citizens can visit any healthcare establishment they wish, although referrals from private or practice-linked GPs are increasingly being used. Healthcare insurance is a part of the Belgian social security system. This means that citizens must join a health insurance fund (‘mutuelle’ or ‘ziekenfonds).

Belgium is known for being one of the few countries where euthanasia is legalized. Of course, the regulations are very strict.

The medical education system in Flanders has recently changed; instead of 7 years, it has now been shortened to 6 years. The first three years are the bachelor, the last 3 (or 4 for the old system) are the master years. The internships start in the master years, and the exact moment is different for each university. After these 6/7 years, the student applies for a program of a specific speciality, general practice or a research-orientated program, which takes another 2 to 6 years to complete.

Students have to pass an entrance exam before applying to one of the Flemish medical schools.

The system in Wallonia is different, as the students do not have to pass an entrance exam.

In Belgium you can easily travel by bus, train and in some cities by metro and tram. These are some handy websites concerning travel:

Students often move in the city by bike. Some LCs provide bikes for incoming students.

Belgium, the heart of Europe, is known for its big festivals such as Tomorrowland and its beer, chocolate, waffles and fries. So a month in Belgium without awesome parties and good food? Impossible! With our social program, we guarantee to show you every side of our beloved country!

During the week: Social Program organised by the LC:

In the weekends we organise a national SP:

SPECIAL EVENTS
July:
Ghent Festival: a free festival in the streets of Ghent with performances of big and little stars, street theatre, dance festivals and art workshops. During 10 days the whole city party and every year, 1,5 million people come to Ghent to join the festival. Also, our national holiday (21st of July) is celebrated with a lot of parties and fireworks.

The Belgians are known for being very kind and friendly people. Belgium is a multicultural country, especially the big cities (Antwerp, Brussels) have a very diverse population. Belgians are known to be very open-minded and respecting towards minorities.

We try to be openminded people and therefore are accepting of the LBGT-community, we try to respect different religions and ethnicities. Gay marriage is legal in Belgium, as well as abortion and euthanasia, although they are well regulated and defined in the law. However, this does not mean we do not have problems with racism or homophobes. Often are headpieces such as headscarves, not allowed in workspaces, especially in catholic hospitals this can be a problem.
We have a lot of different religions, especially in bigger cities like Antwerp and Brussels. In Antwerp, there is a significant Jewish community due to the diamond trade. Other religions are protestants, Muslims, secular religions. Most Catholics in Belgium don't regularly attend church. However, this is officially the biggest religious group in Belgium.

Often people in Belgium will eat bread twice and only eat a hot meal once in a day. The hot meal is often the meal eaten with the whole family and is therefore usually the dinner as most parents are working during the day. However, this can vary depending on the meals offered at work/school, work hours, ... Most people and especially school children bring their lunch, bread, with them in a lunch box. Not all schools offer meals during lunch breaks.
Dinner is often served between 5 and 7 pm which is earlier than in Southern Europe.

Belgian people are also known for their punctuality. It is very important to come on time. It is rude being late without a warning in advance.

Cannabis, as well as other drugs, are illegal in Belgium!
There is a smoking ban since 2011 or so which means you cannot smoke in places which serve food, e.g. restaurants, bars, except in designated rooms or outside. Also, in the workplace, there is a smoking ban. Hospitals often provide a space somewhere on the premises for smokers.

Supermarkets are often open between 9 am and 7 or 8 pm. Regular stores, e.g. clothing stores, are open 10 am till 6 pm.

Our governmental system is complicated. If you want to know more about it, don't ask the regular people in the street cause they often can't explain it. There should be some good videos on youtube that can help you understand why we broke the record 'longest without a (federal) government' while still functioning or why some political issues are very complicated.